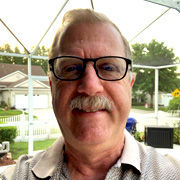 I was born and raised in the Chicago suburbs where I loved to do anything outdoors. I was always outside playing sports, sledding or ice skating from dawn until dark. I am the youngest of four children and so a little bit spoiled. I also have four children spread from Miami to Hollywood and with siblings from Chicago to Hawaii, there is no lack of places to visit family. I have a gay son in Hollywood and lesbian daughter in Chicago and am most grateful they have always been able to be open and authentic. I left Chicago in 1995 to escape the cold snowy winters. I spent a few years in Boca Raton before moving to Phoenix and on to San Antonio; before returning to Tampa in 2015. I am a workaholic, but when I relax I can be found sitting poolside with a good book (defined as anything by John Grisham) and a nice cigar.