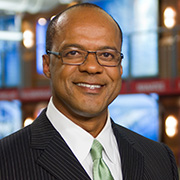 Trevor is an Emmy Award winning broadcast journalist with more than 20 years’ experience in television news.

Originally hailing from Dayton, Ohio, where he started his career at WHIO-TV, Trevor graduated from Bowling Green State University with a degree in Radio-TV-Film.

This is Trevor’s second time living in Florida. In the late ’90s he worked as a Bureau Chief for WFTV-TV in Orlando. He then moved to Atlanta to work for WAGA-TV and then to Birmingham, Alabama as an anchor for WVTM-TV.

Trevor is a fitness enthusiast and served as a trainer for FitWit Bootcamps in Atlanta. In his free time, he has volunteered to mentor high school students at the Boys and Girls Clubs and has gotten youth physically active through FitTeens.