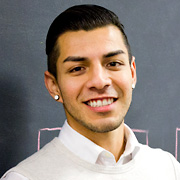 Marco has a long history as an advocate for the LGBTQ, immigrant, and racial justice movements. He is the director for the Contigo Fund, founded in the aftermath of the Pulse massacre to support the recovery efforts and healing of those impacted and building power for historically marginalized LGBTQ communities of color in Orlando and across Central Florida. He has also worked with United We Dream, the American Federation of Teachers and AFL-CIO, as Public Policy Director at the True Colors Fund, and as National Field Officer at Immigration Equality. His commitment is a direct result of his own life experiences as an undocumented and queer person of color, including family separation through deportation, poverty, unstable housing and homelessness. Most recently, Marco was honored as the first ever recipient of the Reed Erickson Trailblazing Leadership Award presented by Funders for LGBTQ Issues in 2017 and the Haas, Jr. Award for Outstanding LGBTQ Leadership for Immigrant Rights presented at the National Creating Change Conference in 2018.

Contigo Fund, which emerged from the Pulse massacre, is a grassroots, community-driven, and nationally leading philanthropic model that supports social, racial, and gender justice in the U.S. South.

Contigo offers financial support to emerging and existing organizations working to heal, educate, and empower those directly and deeply affected by the tragedy and historically marginalized by society – particularly LGBTQ and Latinx individuals, immigrants, and people of color – building an intersectional movement to end all forms of bigotry in Orlando and across Central Florida.

Contigo believes supporting and advancing the transformation taken root in Orlando and a powerful movement for LGBTQ communities of color in the U.S. South brings us all closer to justice and liberation and will lead to meaningful and lasting change for our entire nation.