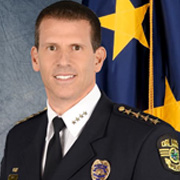 Chief John Mina was born in New York, NY to Michael and Patricia Mina and has two brothers. After moving to New Jersey, he attended St. Michael’s Catholic School and is a graduate of Lenape Valley High School. He received his Bachelor of Arts degree in Criminal Justice Administration from Columbia College. Chief Mina has also completed the Southern Police Institute Command Officers Development Course and is a graduate of the 254th Session of the FBI National Academy.

After serving in the United States Army for three years in the 82nd Airborne Division as a Military Police Officer, Chief Mina moved to Orlando, FL in 1990 to attend the Police Academy. He has worked many assignments throughout his career at the Orlando Police Department, including the West Patrol Division, Criminal Investigations Division (Sex Crimes Unit, Crimes Against Children Unit), Community Policing Division, Training Unit, Drug Enforcement Division, and served as the Staff Director for the Chief of Police. He has also served as the Division Commander of the North Patrol Division and Criminal Investigations Division.

In addition to his regular assignments, Chief Mina served as a member of the SWAT Team for seventeen years and was the Team Commander. Chief Mina has been recognized with numerous awards and accolades during his career including the Award of Valor, the Chief’s Special Award, numerous Awards of Commendation, Community Service Awards, Unit Citations and was recognized by the Florida Police Chiefs Association for exceptional achievement and commitment to the public he serves. Chief Mina also served as the Bureau Commander for the Patrol Services Bureau.

Effective April 1, 2014, Chief Mina was appointed by Mayor Dyer as Chief of Police for the City of Orlando.

Chief Mina is married to Tracie Mina. They have two sons, Chase (22) and Nicholas (20)