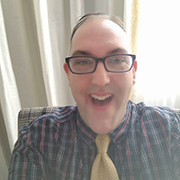 George Wallace is the Executive Director of the LGBT+ Center Orlando. He is the former Executive Director of Orlando Fringe, where he was for 15 years. He holds an MPA from Troy University and a MMBA from Rollins College. Originally from Boston, George has a passion for equality for all citizens, is a local advocate and was named one of Orlando’s Most Remarkable People in 2015 by Watermark. In his free time he enjoys travel.