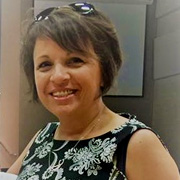 Liz Saltigerald is an LGBT+ ally who has been a Florida resident since April of 2014 and a resident of Pasco County Since December 2016. She is an Air Force reservist of more than 15 years as a police officer, weapons instructor and currently as a medic.

Her full-time career is with the Tampa VA where she is Spinal Cord Injury nurse and member of the LGBT+ committee where she also is involved with LGBT patient-centered programs and initiatives.

Liz and Denise (our president) met during a Metro and Tampa VA event in 2017. It was the very first ever Trans Fashion Expo were 80 transgender men & women were clothed at absolutely no cost to them. Liz is honored and proud to serve our Pasco County community, as an advocate and an ally in honor of her daughter who is a member of the Veteran & LGBT+ community.