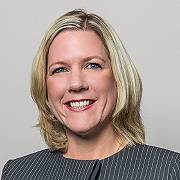 Cindy Watson, CEO of JASMYN, has been a community organizer and non-profit administrator for over 30 years. In 1980, she opened a battered women’s shelter for Inupiaq women in northwest Alaska, and later ran a women’s center for rural women in Vermont. In 1992 she joined the Jacksonville Area Legal Aid staff working in health care advocacy, with a focus on assisting people with HIV/AIDS with their legal needs. She was a founding board member of JASMYN in 1994. JASMYN supports and empowers LGBTQ young people by creating safe space, providing health and wholeness services, and offering youth development opportunities for teens and young adults, while bringing people and resources together to promote equality and human rights.

Ms. Watson has been the CEO of JASMYN since 1998. She was appointed a Commissioner of the Jacksonville Human Rights Commission in 2006, where she served for eight years. She is a past Community Co-Chair for the First Coast Community AIDS Prevention Partnership, a community planning group where she has been an active member since 1995.

Ms. Watson has been a trainer on diversity issues with a focus on sexual orientation, gender identity, and HIV / AIDS education. She holds a B.A. degree in Psychology from Furman University, and was a member of the Leadership Jax 2014 class. She was a 2015 recipient of the Silver Medallion Humanitarian Award from OneJax.