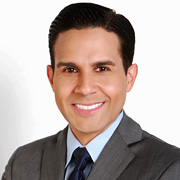 Luis M. Martinez earned a bachelor’s degree in Communications from the University of Sacred Heart of Puerto Rico and a master’s degree in Business Administration from Ana G. Méndez University System (SUAGM), Orlando. During his college years, Luis obtained his first job opportunity at the Department of State of Puerto Rico as Press Officer, which allowed him to gain experience in the communications field and government.

While serving at his job at the Department of State of Puerto Rico, Martinez created Starlight Productions, a non-for-profit organization devoted to encourage talented children and youth develop their artistic abilities through training and musical-theater performances. Luis was responsible for managing media and public relations. He was also in charge of marketing to help increase awareness in the community regarding the organization’s mission statement, help create partnerships with corporations and government agencies, planned and executed fundraising events, as well as promotional initiatives.

In 2000, Martinez relocated to Orlando, Florida to enhance his professional career and pursue a master’s degree in business. Martinez worked at Walt Disney World Company while studying Arts Management at University of Central Florida (UCF). He was also involved in the communications field and philanthropic initiatives and performed as an actor and dancer in theater plays and TV commercials targeting the Hispanic market.

In January 2012, Luis was appointed by Orlando Mayor Buddy Dyer as Director of Multicultural Affairs to enhance the engagement of the Hispanic and multicultural communities with the municipality. He assists and makes recommendations to the Mayor in the implementation of City policies and initiatives that foster inclusion, acceptance and diversity. In addition, he serves as the Mayor’s Spokesperson to local Hispanic/multicultural media, LGBTQ Liaison and supports the Economic Development Department by providing bilingual orientation to Latin American entrepreneurs who are considering Orlando to expand their business.

After the Pulse tragedy, Luis played a critical role in the City’s Communications Emergency Management Team by managing local, national and international media inquiries and providing updated information in Spanish to the Hispanic/Latino community about how City government, public agencies and community partners were working together to respond to the tragedy by offering services to Pulse survivors and victims’ families, such as the Orlando United Assistance Center, the OneOrlando Fund, as well as any other critical information.

Luis is a well-known leader in the local community and has received multiple accolades and awards from reputable organizations, such as the Hispanic, Puerto Rican and Brazilian Chambers of Commerce.